There’s something about yeasted doughs which puts me off them. I don’t know whether it’s the fact they need time to rise or whether it’s simply that sometimes they seem not be working quite right. I am also terribly scared they might not cook in the middle, something I don’t fear when baking a cake. I also think I don’t make enough of them, so I started this week by making these and a loaf of yummy bread. I need to start facing my (unfounded) fears, so better be practicing. Needless to say, it’s important to knead these breads by hand as much as possible. Therefore, I usually start the mixture in a freestanding mixer, but tip it out once it’s combined and knead it by hand. I also don’t flour the surface when possible, neither I drench it in olive oil. Rather, I leave it plain. I read in a really good book that by doing so you increase the friction of the dough on the work surface, which in turn means it kneads better.

Chelsea Buns, which date back to the 18th century, are a great example of British baking. A sweet dough is rolled out and then filled with dried fruits (usually currants). Then you roll it all up (much in the way as a Swiss roll), cut it into portions and bake it. This recipe is Paul Hollywood’s, although I ended up tweaking it slightly because 1) I didn’t have all of the ingredients and 2) I forgot to add the egg. Personally, I think it makes the whole thing lighter. I incorporated the missing apricots with dried prunes and I have to say it worked really well. I gave them to my partner to take to work and they went down a storm (he says). Also, rather than drowning the baked buns in jam and icing, I decided to simply drizzle some on top, thus making it look a lot nicer than the mess Mr Hollywood makes on TV and, probably, slightly less sweet.

Ingredients (for the dough)

Ingredients (for the filling and to finish) 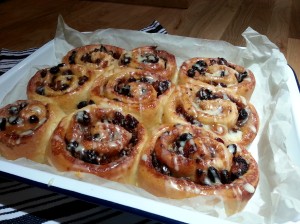 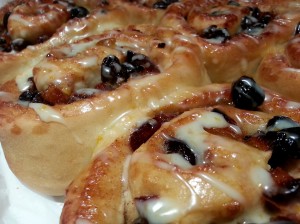