Here’s a recipe for all those who love cookies but are looking for a new twist on the subject. These are traditional Italian cookies (literally, “Lady’s Kisses”) which are made from hazelnuts (or almonds, according to your taste) and then sandwiched together with some dark chocolate, so that the two halves are “kissing”. Very moreish, we have an Italian expression which goes “uno tira l’altro” (one follows the other one) and which perfectly describes these cookies. When you make them, please make sure you allow plenty of cooling time in the fridge. The first try I gave these turned out to be a complete disaster as the biscuits literally melted in the oven. Erm. The recipe below if from here and it was a roaring success with the people I tested it on. 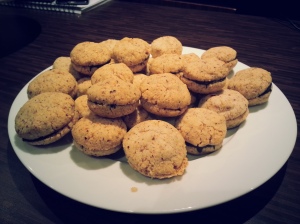 This typical Italian bread is given a new makeover with the addition of unconventional ingredients, such as chorizo, and eggs, which are a strong Easter symbol as they celebrate life, rebirth, etc. The choice of ingredients you decide to fill your wreath with is totally up to you. I recently found out smoked cheese and black olives are a match made in heaven and, for that matter, smoked cheese seems to be complementing them quite well too. For those of you who are unused to eggs being baked in the oven, let me ensure you this is a traditional Italian centerpiece. If you don’t like/want eggs on top, just leave them out, the wreath will be very flavoursome and beautiful as it is. Also, the whole assembling phase might seem long winded and difficult, but let me ensure you I had not done this before and it was a piece of cake. Happy Easter everyone! 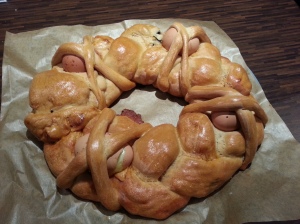 Pure comfort on a cold winter night – yes, I know it’s almost April, but it’s still snowing here in the UK and temperatures are not set to rise until mid next month anyway. Just when you need some solace and some quiet, especially after a hard day at work, this will provide that and more. The recipe comes from the April issue of delicious. magazine and contemplates the ingredients in the title. However, should you feel more adventurous, please feel free to modify it by adding, removing, substituting or even revolutionizing altogether. After all, the dish is a pasta bake and that needs to suit whatever you feel like eating and whenever you feel like it. Last note: the original recipe asked for Provolone, an Italian smoked cheese which my local supermarket clearly does not know of. I substituted that with a British smoked cheese and it worked very well. 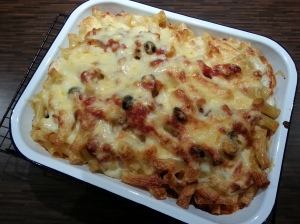 Right, let’s talk technique. How many of you know what ombre icing is? In case you don’t, it is a technique used with buttercream (or any other kind of frosting) whereby you use your icing in different shades in order to create a gradual effect. You can find plenty of examples on the Internet, here are some. The most widespread form of ombre icing – which I read seems to be quite a big hit these days – involves piping small dots of icing on the cake side and then smearing them with either a palette or the back of a spoon, so as to obtain a drop-like effect. Very cool, I have to say, but extremely long winded and meticulous. In this post I wanted to show you how to use the same principle to obtain a stunning centrepiece and still obtain a well decorated cake.

This is not a cake. Well, not strictly speaking, anyway. You basically make an almond case and fill it with the smoothest and nicest blancmange you’ve ever tasted. If you don’t know what blancmange is, have a look here. I took this one to work (like many others that I make) and it disappeared in a matter of seconds. Make sure you set aside plenty of time for this one as it will need at least 6 hours to set in the fridge. I made it two days in advance, so by the time I brought it in it was perfect and solid – unlike the last cheesecake I made, which melted on the tray. The recipe comes from the March issue of La Cucina Italiana. 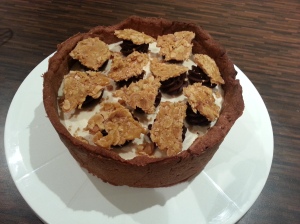 For a little Moroccan touch to your evenings in, why not try this African-meet-Middle-East dish? Really easy to assemble, twice as easy to cook and very, very tasty. You can also adjust the final hotness by choosing how much chilli flakes you put in and, should you prefer to tone it down a little and not use chillies whatsoever, why not substitute them with smoked paprika or cinnamon? The recipe is James Martin’s, but I adapted it ever so slightly by using my own spice mix rather than the baharat one as advised.

Ingredients (for the prawns)

These quantities are for approximately 12 medium size king prawns. Adjust accordingly if you are using larger amounts.

Ingredients (for the couscous)

I have to say I was a bit scared at first to try this recipe, mostly because it involves a rough version of choux pastry, albeit with less eggs and definitely less work. Still, I can confirm this is the easiest and tastiest little snack you can try. If you have a piping bag and a big nozzle, then pipe the little balls. If you don’t, then I’m sure two teaspoons will do just as good. This recipe is from Lorraine Pascale’s Fast, Fresh and Easy Food.

Now, before you start complaining, these are dead easy. Just a bit of mixing and piping and it’s all done. The recipe comes from an Italian food magazine, La Cucina Italiana (The Italian Cuisine), which I buy when I go back home as it’s full of very interesting recipes and food news. The original recipe also asked to sprinkle the muffins with some dark chocolate, but as I was more after a savoury version of the dessert rather than a proper sweet muffins, I left that out. I would still serve this after your mains, as the whipped cream makes it sweet anyway – and the carrot batter, to be fair, is very much reminiscent of a miniature carrot cake. The quantities below make 12 muffins, but you can only see 10 in the picture below as my partner slyly decided to kill two even before I had the chance to ice them… 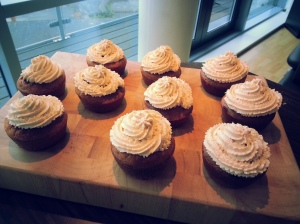 Ever heard of the Hummingbird Bakery? Well, if you haven’t, then you should. I have been making their Guinness Cake for ages and it’s always a raving success. They have so many amazing and creative ideas for desserts and they have recently published their second book (which, of course, is already in my possession). It’s called Home Sweet Home and contains plenty of innovative recipes for cupcakes alongside more traditional cakes and American-inspired pies and tarts. Just delicious! This cake comes from this book, so I hope I am not breaching anyone’s copyright by posting the recipe on here. It is a banana sponge cake with a custard filling and a chocolate ganache on top. Now tell me you don’t want to eat it! The recipe involves three main steps, so I will divide ingredients and method accordingly. 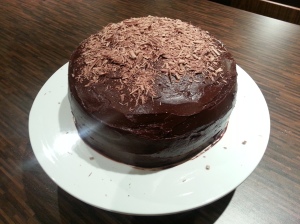 Method (for the sponge)

Ingredients (for the custard)

Method (for the custard)

Ingredients (for the ganache)

Method (for the ganache)

This cake is the easiest piece of baking I have ever done. All it requires is a bit of cooking and then the food processor and the oven will do all the hard work. Nigella bakes hers with clementines, I have tried with oranges and it’s a raving success, less so with limes as it was extremely bitter, although I later found out the fruit I used had more pith than pulp, so that might be why. The recipe below is for the orange version, but feel free to substitute more or less the same weight with lemons, limes, clementines and so forth. I reckon two big oranges will probably equal about 5 to 6 limes and the same amount of clementines, while with lemons it all depends on how big they are.