A very easy and tasty dessert for those of you who are proficient in the art of shortcrust pastry and would like to tweak the recipe and try something new. This recipe comes from the MasterChef Cookery Course book.

The texture of the filling is slightly different from a standard lime tart (or tarte aux citrons, if you want to be over pompous and show off that you can speak French), mostly because the eggs are whisked up until the very last minute, thus creating a very light and frothy filling. Needless to say, you can opt for a more traditional pastry case and omit the cocoa or swap the lemons & lime zest and juice for 1 1/2 oranges’ or 2 satsumas’, the possibilities are endless. Also, where possible, I swap standard caster sugar with golden caster sugar, mostly because the latter is less refined and therefore healthier for you – not to mention it adds a caramel-like flavour to your bakes! 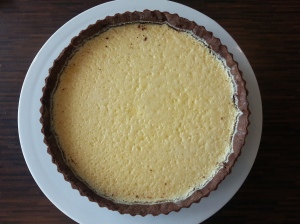 Ingredients (for the pastry case) 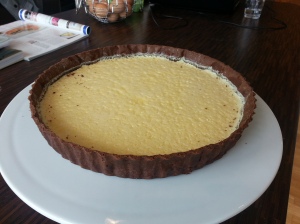 This is a really easy recipe which stems from 3 main principles: it is extremely easy to make, it can be prepared in advance and, for once, the recipe is all mine. The basics behind a good gratin are, as far as I am concerned, spuds, cream and garlic. Anything else is up to you and can make the real difference between a sublime baked gratin and a plain one.

A gratin really is a layered dish mainly made from potatoes, which are finely sliced to allow for a better bake and can also arranged in a fairly geometrical pattern. In this case I added mushrooms and sweet potatoes (I had some leftover in the fridge), but you can decide to keep it simple and only use potatoes or, should you be a little bit more adventurous, even try it with pumpkin or other hard root vegetables. The cream really is the key, as that is what will slowly seep into the vegetables and cook them. Consider it like a milky bath, a bit like Cleopatra’s (ok, I’m pushing it a bit too far now).

I said you can make this in advance and really, you can follow the recipe up until step number 4 and then leave it in the fridge to bake at a later time. 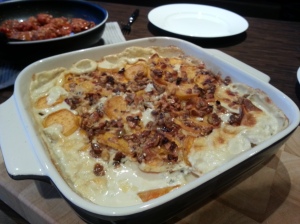 This is another butterless cake. This time, however, the batter is made from eggs, carrots and coconut. I found this recipe in an Italian chocolate cookbook modestly called Il Cioccolato (Chocolate), but I had to slightly adapt the recipe to make it work my way. The cake itself does not require much skill: the all in one method seems to be working miracles here. The chocolate is also merely a glazing on top, so you could deceive yourself into eating slice after slice by justifying your actions with how healthy the cake really is.

The cake before icing 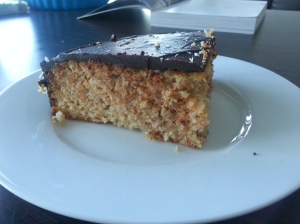 This is a weird cake as the sponge is made entirely from macadamia and contains no butter. The nuts are finely ground and then mixed to the other ingredients, and their natural oils provide the ‘fat’ base for the cake sponge. The final decoration really is up to you, I merely followed the recipe as in the GBBO book and experimented with feathering. For those of you unfamiliar with the term, this refers to a particular type of icing whereby a ganache is decorated with feather-like shapes, obtained by tracing horizontal lined with a darker ganache on the smooth base surface and then drawing the surface with a cocktail stick to leave a trail behind and bend the horizontal lines. The result is pretty much self-explanatory. 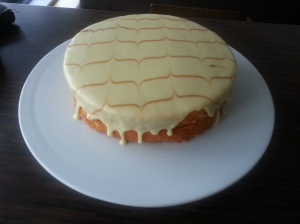 Ingredients (for the ganache)

Before we even venture into the recipe, a couple of points. By salad cream I do not mean the disgustingly mayo-like and yellow or white-ish stuff you Brits squeeze/dollop/smear over your salad to dress it. Rather, I mean an actual cream made of boiled salad leaves. Secondly, I know you are used to sweet choux pastry, but its savoury counterpart is just as good.

For this recipe, please make sure to buy good quality scallops and to clean them thoroughly before use. Also, allow plenty of time to prepare and assemble everything. This recipe was featured in the March 2013 issue of La Cucina Italiana and works brilliantly as a canapé or starter when you have people over. Dead easy to make too! 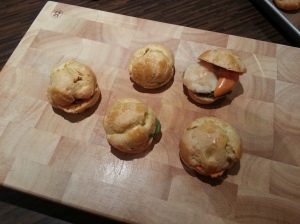 This is a stunning centerpiece for whichever occasion you might be willing to bake. The cake comprises of 2 génoise sponge layers alternated with 2 meringue discs and sealed with orange-flavoured and praline-dusted buttercream. The sides of the cake are then iced with more buttercream and are covered with coarser praline. It takes a while to make s there is quite a lot involved, but it isn’t as difficult as it might come across as and, once assembled, you will be glad to have spent that extra hour in the kitchen. The recipes comes from the GBBO book, but as it lacked a picture to go with the cake, I had to improvise a little bit on the decoration.

For those of you who don’t know, a génoise sponge is a whisked sponge which involves very little flour and is made by whisking the eggs in a bowl set over a pan of simmering water, so that they start to cook and, at the same time, increase in volume at least threefold. 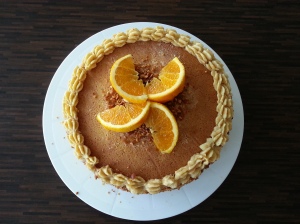 Ingredients (for the meringues)

Ingredients (for the praline)

Ingredients (for the butter icing)

The other day I was scouring the Internet on the lookout for new flavour combinations and I came across this recipe. Needless t0 say, my first reaction was probably the same as everyone else: disgust. I am not a big fan of mixing sweet and savoury. I don’t like salted caramel (in fact, I think it’s an abomination) and therefore using fruit in a stir fry was something I would have never even thought of. Until now.

I am not claiming this is the best combination ever. It probably is an acquired taste or rather something you either love or hate at first sigh (taste, more like it). However, as we did enjoy the stir fry, here is our little adaptation of the recipe. It is a simple stir fry, after all, so just use what you have!

You know, I used to think baked cheesecakes were some sort of baking masterwork no-one could tackle. I’m not sure exactly what is was, maybe the idea of actually baking cream cheese, which I still find kind of hard to digest. However, I have to say that if you follow a few very easy steps, a baked cheesecake can be as easy as a non-bake one.

First of all, the oven temperature, which cannot be as high as for a victoria sponge. The reason behind it is that the cheese has been mixed up with eggs (and other ingredients, most of the time), so by increasing the temperature above 160 degrees Celsius you usually overbake the cheesecake and this results in cracks on the surface.

The same applies to the baking time. Bake it until the cheesecake still has a little wobble in the middle. I know it sounds off-putting, but the cake will keep on cooking upon cooling and the wobbly bit will set as nicely as the rest of the cake.

Last, the resting time. Allow the cheesecake to cool completely in the oven, then put it in the fridge and allow plenty of cooling time there. The cold of the fridge not only allows the cheese to become firm again, but also stabilises the whole cake so that when you try to unmould it the cheesecake doesn’t collapse and, most importantly, doesn’t melt.

This recipe is taken from the GBBO book, but can serve as a basic recipe to personalise your cheesecake and come up with unusual flavour combinations.

Did I tell you I’m secretly (not really) training for the GBBO? I have decided I want to give all things baked at least a go to see whether I would be up for the challenge. That’s also why I’m baking like a mad person, on top of actually and thoroughly enjoying it. These are from the How to Bake book from the GBBO and they might look very complicated, but believe me they only require a little bit of proving and then sbam! They’re ready.

These are a buttery and nutty take on cinnamon buns. The recipe is pretty basic, but I would suggest giving it a go first as a trial batch if you have never baked with a yeasted dough before.

Ingredients (for the dough)

Ingredients (for the topping)

Yes, I know. The name is extremely clichéd and you wouldn’t have expected it from me, being Italian and all that. I have to say, though, that in my defence this is an original creation of mine and, as such, deserves a creative name. What with it being a lasagna made with ricotta and courgettes, the name came by itself. Also, ‘lasagnotta’ sounds particularly cute in Italian.

Right, the concept behind this recipe is that I had some courgettes and some ricotta in the fridge. I had read somewhere that you could make a good lasagna out of it, but as I did not recall neither where I had read it (I devour food literature) nor how much of each, I decided to improvise. The result is very good and I am particularly proud of it. Please feel free to adapt the recipe, I used all the little pieces of leftover cheese I found in my fridge, but you are more than welcome to stick to just one variety. I also think a very good addition to the lot would be smoked salmon, as it goes really well with courgettes and cream. 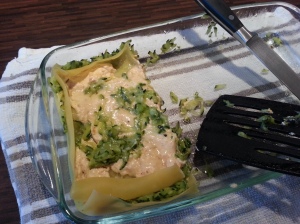