The main concept behind this dish is how simple it is to make. Forget fiddling about with pastry cases, having to blind bake them and hoping the bottom doesn’t come out soggy. The filling here is encased in a potato crust, which makes is a lot easier to prepare (all you need is a piping bag – but you could also spoon it in the tin) which is then enriched with cheese and herbs, to make it tastier. I have used ham and spinach for the filling, but really any other fillings would do as well. Try chicken, tuna, crab, wilted salad leaves and you will get a very tasty yet easy dish every single time.

Also, I used a 20cm springform tin as I currently do not have a standard cake pan (heaven forbid, I know), but as long as you grease the sides any cake tin would do, even a standard sandwich one. 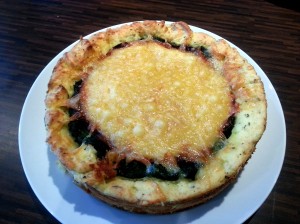